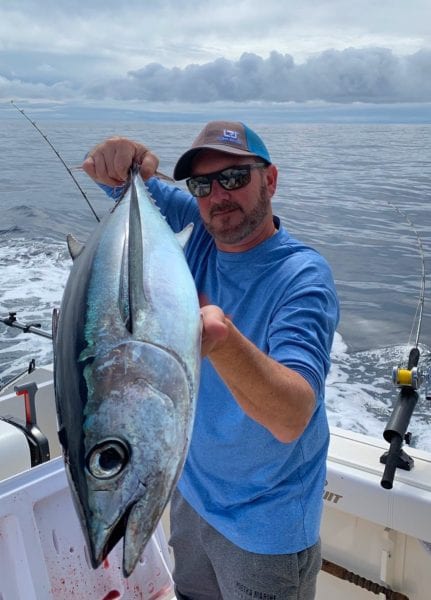 Albacore tuna is a migratory fish found in the cold waters of the Pacific. It is extremely fast moving, with top speeds of up to 80km/hr. These fish travel in huge offshore schools that are often 30km wide! They are easily recognizable by their oversize pectoral fin, which has given them the nickname “longfin” tuna.

Prior to 1960, almost no one targeted Albacore. However, this intense, adrenalin-stimulating fishery has lately become very popular amongst sportfishermen. Albacore tuna fishing does require boats to venture up to 40 miles offshore to locate the schools; it is important that anglers travel using a buddy system. For tuna fishing Vancouver Island, our guides group up and launch out of Newton Cove Resort, which is conveniently only 15 minutes from open ocean.

The Albacore tuna run occurs in a six-week window every August when thousands of fish pass along our offshore Vancouver Island waters. The schools are often unpredictable, and swim so far offshore as to be out of reach of recreational boats. However, as tuna swim so fast, they might be well out of reach one day, and only 30 miles offshore the next. While waiting for the fish to get close enough to reach, anglers must keep their gear ready to go at a moment’s notice.

When tuna fishing on Vancouver Island, it is crucial to fish the conditions. Our guides keep updated the evening before and morning of a prospective departure. We use the Terrafin Satellite Imaging website which provides us with up-to-date sea surface temperature (SST) and chlorophyll charts. Albacore are found in warmer waters of 13°-18°C near a green-blue chlorophyll colour break. As boats are heading well offshore, it is also imperative to watch the updated weather forecast.

Our guides embark as a fleet, spreading out to marked way points to scan for visual clues of the presence of bait schools. Diving birds are a good indication, as is floating debris which marks a current seam. Anglers should also watch for the obvious – jumping bait or tuna. Once tuna are located, we radio in the troops to get in on the action.

Tuna are generally caught by trolling action-oriented lures such as large crankbait type diving plugs like X Rap Magnum Rapalas and top water lures such as Zukers, Jet Heads and Tuna Feathers. Lures that move just like live bait are sure to get the Albacore tuna’s attention. We generally troll at 6 to 8 mph with at least two top-water lures and two sub-surface lures.

Albacore is a fast-moving predator with a body built for speed, and they hit the bait like a locomotive. There is no need to set the hook when an Albacore strikes – the fish flies toward bottom at such a high speed, it sets the hook on its own. Be sure to have lots of line capacity to avoid getting spooled! After a long, energetic run, the battle begins. Double and triple headers are not unusual!

Albacore is exceptional to eat and is often sought after for sushi and sashimi dishes.  Its firm white flesh is low in fat and high in protein, and tastes wonderful fresh, smoked, or canned. It also freezes well. 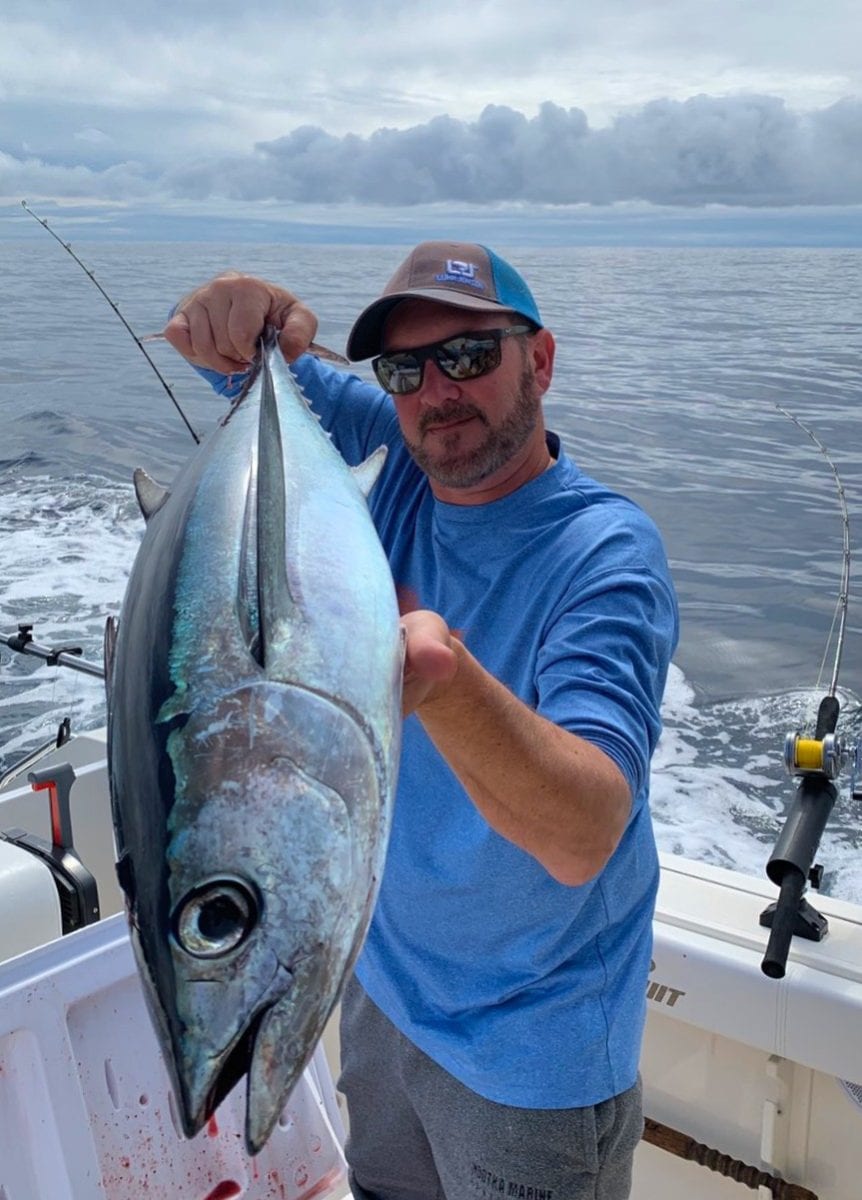 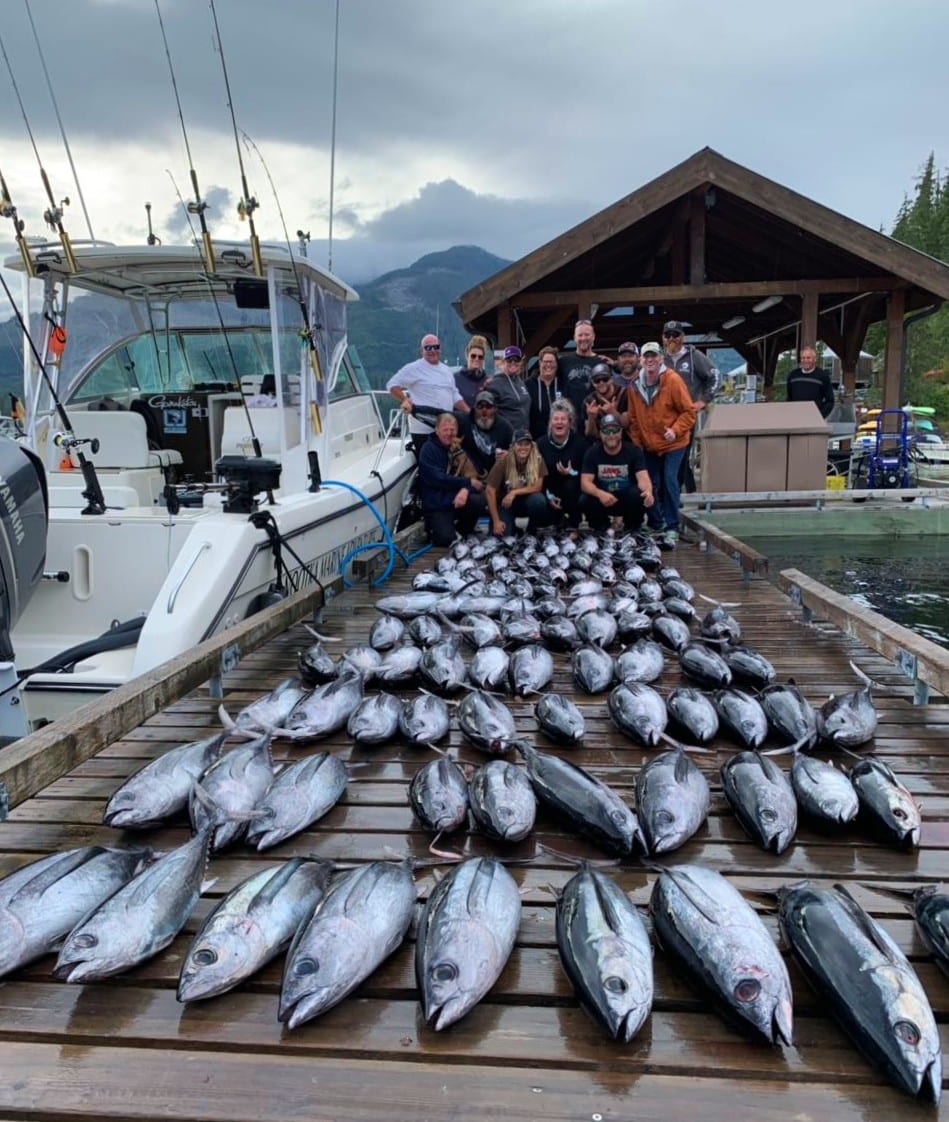 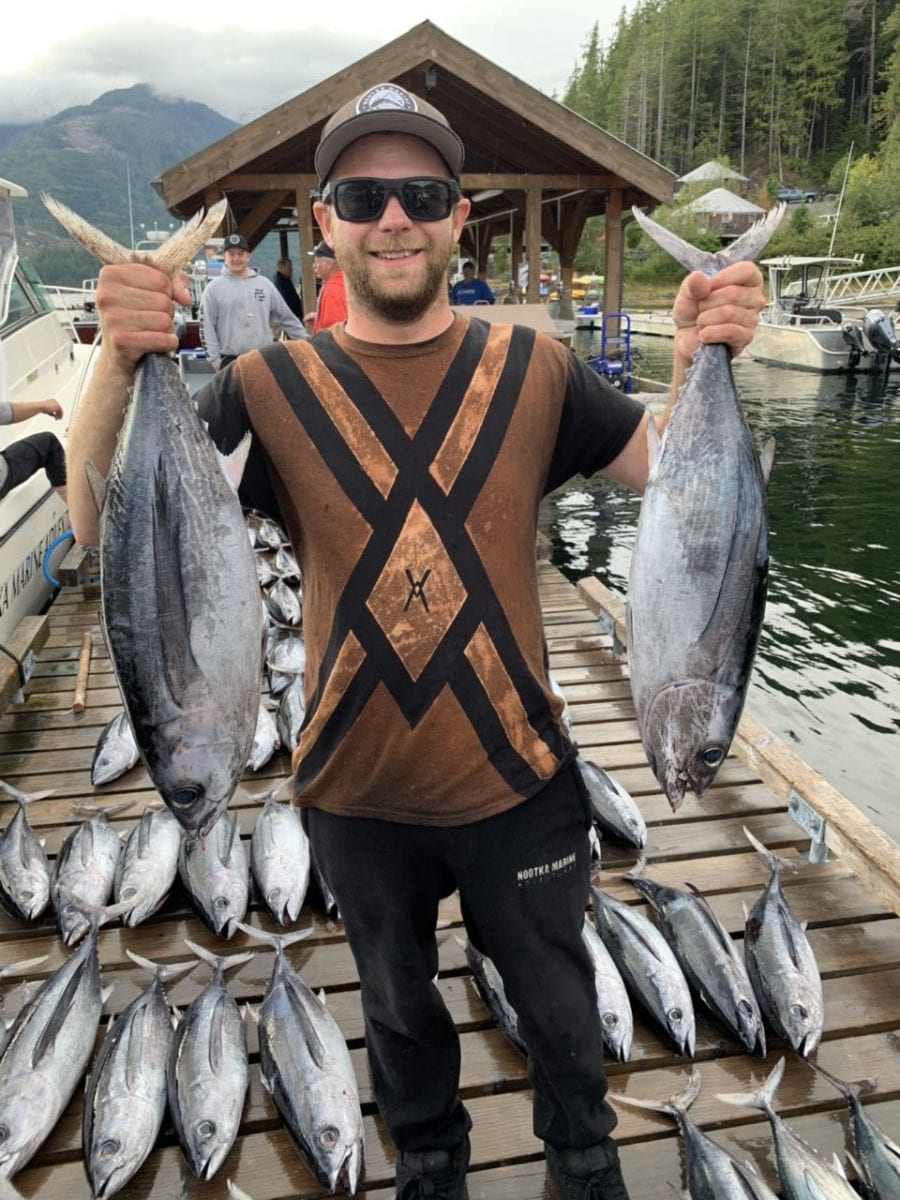 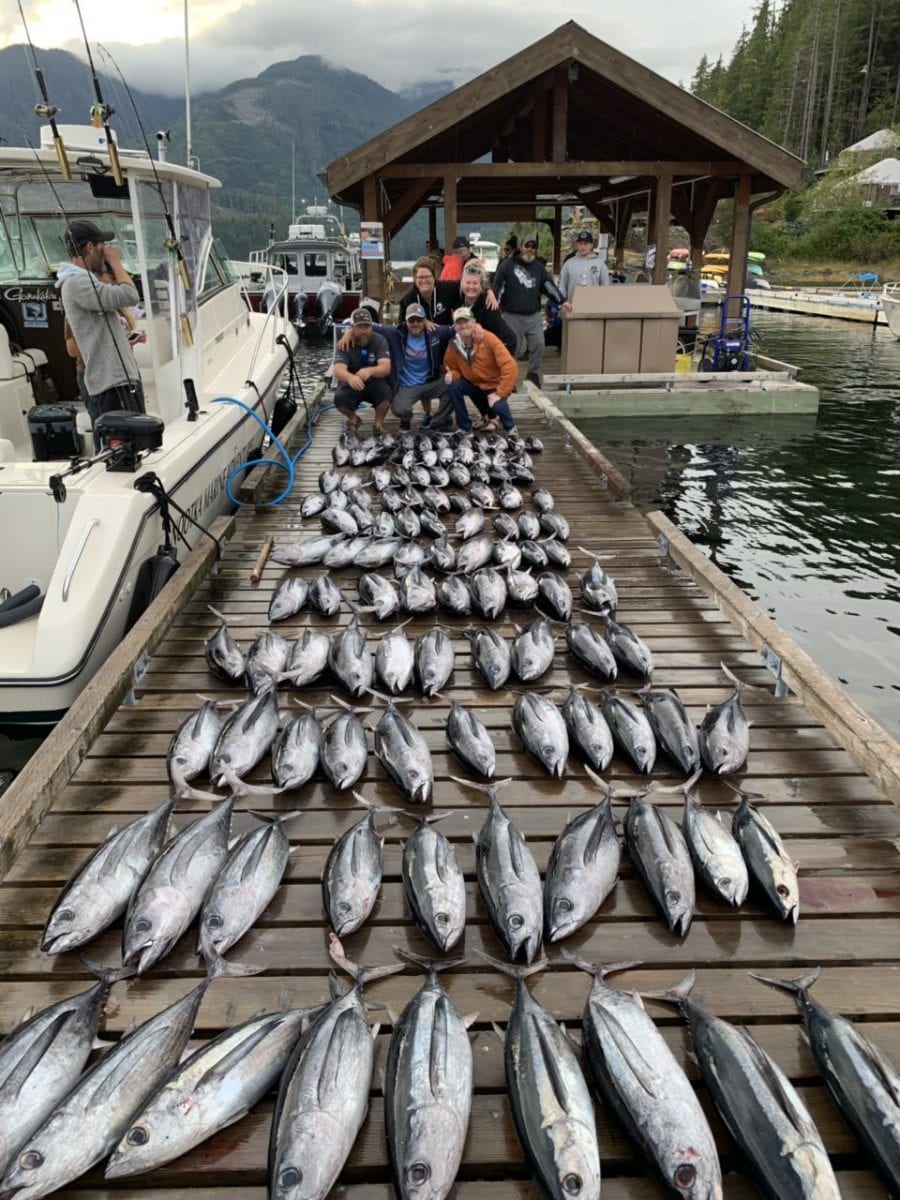 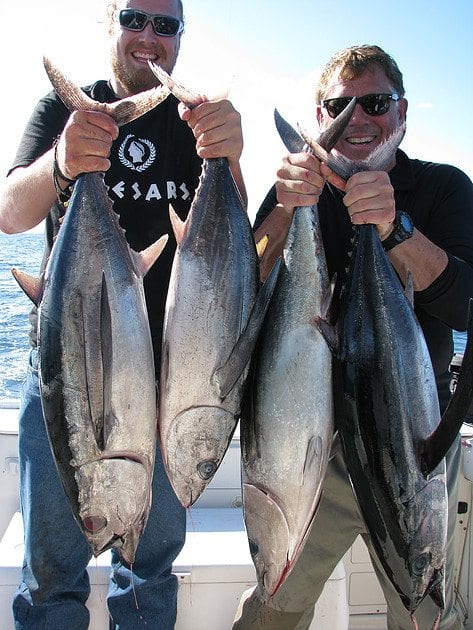 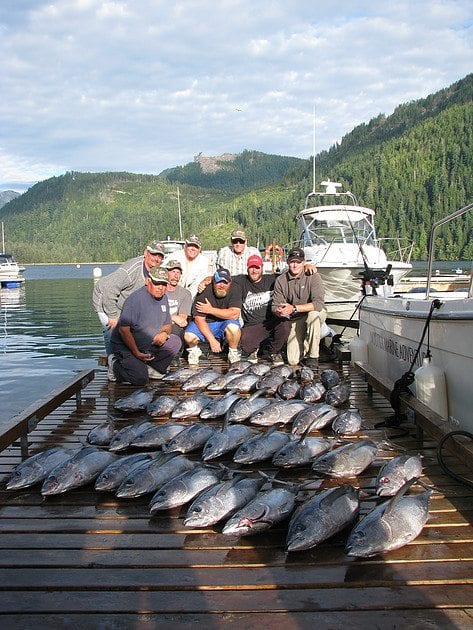 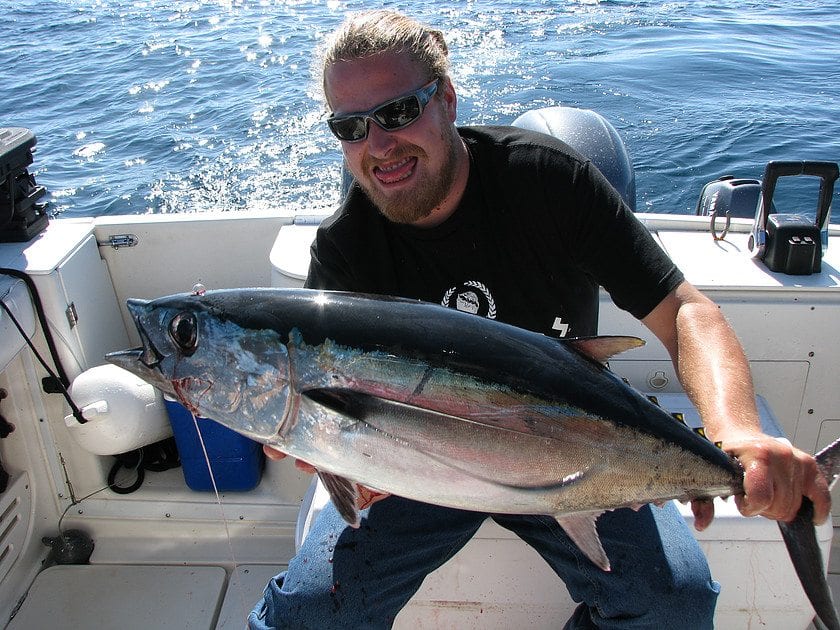 rates
1.877.337.5464
Email Us
Get Directions
View Our Rates
This site uses cookies. Find out more about how we use cookies.